Don't Sit on My Fire Hydrant

Anna Cow brought up a theme that has been running through my mind since I read our Make Cycle 1 assignment email, which asks, "Could shattering the parameters of our introductions help us to move more quickly beyond 'you' and 'us' to a space where equity and diversity are hallmarks of a shared 'we'?"

What does it mean to welcome someone, and what power dynamics are at play?  Anna distinguishes between the French concept of hospitality, which is "mainly let someone stay without asking money (sleep and live) under one's roof" and the English concept, "receptive and open-minded, welcoming, and it also about parties and meals."

In January, I went to a TedTalk in Baltimore, Maryland, U.S. The theme was "Collisions." Much of the content in the amazing talks had to do with Equity of Access.  Ruha Benjamin's TedTalk has stuck with me (as has Jimmy Lin's but for corollary reasons).

Ruha reminded us that "At the heart of discriminatory design is this idea that we can design technological fixes for social crises."

Ruha asks, "Whose voices are missing at the lab bench?" It could be creating separate entrances to the same building, one for poor residents and one for the wealthy. It could be benches designed [ostensibly] for one person, or benches so uncomfortable that one can only sit for a few minutes before needing to get up. Some cities have gotten creative in their discriminatory design, making the designs into "Art Pieces."   As the article states, "One cannot sit on these colorful "artistic" objects, strategically placed to give the impression that one can rest, but having the opposite function."  The author asks, "Are public places for everyone?"

Clearly, no one in #CLMOOC is purposely using discriminatory design.

But I think it is important in any arena which is inherently entitled, such as an online class, to keep in mind those design elements which might be unintentionally preventing people from feeling included, safe, welcome or welcomed.  Like the frog in the pot of water on the stove who doesn't realize that the temperature is rising until it is too late, we can become so immersed in our own experience that we forget what it feels like from different perspectives.

Are there spikes on any of our benches that we were not aware of?

Yesterday I sent out a survey to briefly gauge how comfortable people are feeling with #CLMOOC.  Since there are over 2000 people in the Community, and so far 34 have responded to the survey, I can't say that it is a scientific representation, but I have found that anonymous surveys tend to attract a decent cross-section of those who are fairly content and those who have concerns that they haven't been able to express in another arena.

What is one word you would use to describe #CLMOOC right now?
What is one question you have for or about #CLMOOC?

[Thank you to everyone who has responded or will respond to the survey!]

I will let you do your own analyses of the responses so far.

In the meantime, I challenge us to create solutions to any barriers that might exist in our design, if any.

Michael Rakowitz designed paraSITE shelters as practical solutions and a protest against policies that he felt were harmful to homeless people:

Sara Ross  designed outfits that would allow the wearer to circumvent the spikes or discomfort:

Finally, this video shows how a community in Oxford worked to create a sense of place where people would WANT to be, rather than using speed bumps and negative architecture to try to control people. "A painted "street carpet" was used to slow down speeding traffic and create a greater sense of place...Rather than forcing drivers through physical features like speed humps, and making pedestrians feel they can't use the space, it makes them aware of their surroundings and the street as a place for people."

No experience can be or will be positive and productive for every player.  But since we are asked to create "a space where equity and diversity are hallmarks of a shared 'we'," I think we need to at least ask the questions.

What do you think? 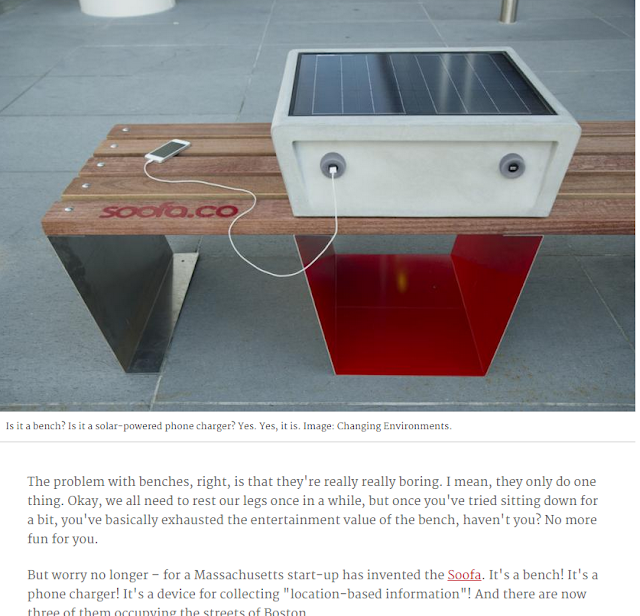 Peace in the questioning,
Susan